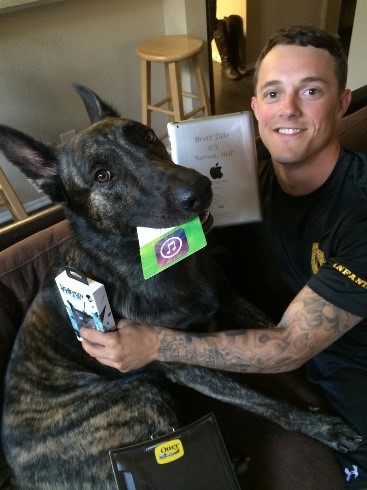 Tim Bartz is well known in the mold making industry as the co-owner of Mold Craft, but many may not know that he is also the co-founder of a non-profit organization that is very close to his heart. Tim Bartz, along with his wife Kim, co-founded a 501(c) 3 non-profit organization called iWarriors. Since its inception iWarriors has raised nearly $375,000 for severely injured warriors to support them through their recovery.

Tim and Kim started iWarriors in 2011 after they got an opportunity to support the 3rd Battalion 5th Marines which is one of the most highly decorated Regiments in the USMC and is commonly referred to as “The Fighting Fifth.” After their 2010 tour of duty in Afghanistan many of the marines sustained injuries and returned home as single, double or triple amputees. One of the battalion member’s fathers happened to be an industry colleague of Tim Bartz. Upon returning from Afghanistan, this young man asked his father if there was a way he could help his injured buddies while they were receiving treatment, which prompted a call for donations.

Tim and Kim answered the call and went on to raise over $10,000 to provide care packages for the wounded soldiers. They decided to gift iPads to help the wounded soldiers stay in touch with loved ones and entertain themselves with movies and music while they underwent months of surgery, rehabilitation, and recovery. They then personally delivered the care packages to Balboa Naval Hospital in San Diego, CA where the Sailors and Marines were undergoing treatment. Moved by their experience, as soon as Tim and Kim returned home, they started the non-profit organization and the rest is history.

Tim and Kim have broadened the call to action and have reached out to business colleagues of their own in the hopes of providing more care packages to our wounded warriors. Christina Fuges, a colleague of Tim Bartz and the Editorial Director of MoldMaking Technology said, “The men and women of this mold making community never cease to amaze me with their care and generosity. It’s contagious. I personally believe in their mission so much that my family continues to donate to iWarriors.” Christina has supported iWarriors for many years not only by donating, but by promoting the charity organization in MoldMaking Technology magazine.

Since 2011, iWarriors has been raising funds through 5k runs, golf tournaments, the iSledders snowmobile event, and many more. More than 98% of the $375,000 that has been raised has gone towards paying for nearly 600 iPad gift packages. The iPad gift packages include a personally engraved iPad, an Otterbox Defender Series protective case, headphones, and an iTunes gift card for apps, movies, etc. Sargent Charles Caswell of the U.S. Army said “I am completely blown away, I never expected to find all the extras inside the box and the inscription on the back of the iPad had me choked up. Thank you so very much. I never expected anything like this I am truly thankful very for everything.”

Tim and Kim Bartz are passionate about supporting our wounded warriors and they will continue to raise money and support them through their recovery via iWarriors. They are so thankful to share this passionate and support through partnership with the AMBA. Kym Conis, managing director of the AMBA, has described iWarriors as, “an extremely valuable tool to wounded members of our US Armed Forces.” If you or your organization are interested in learning more about iWarriors, hosting an event or donating to help the cause, please go to https://www.iwarriors.org. Every dollar donated goes towards helping our wounded service members.